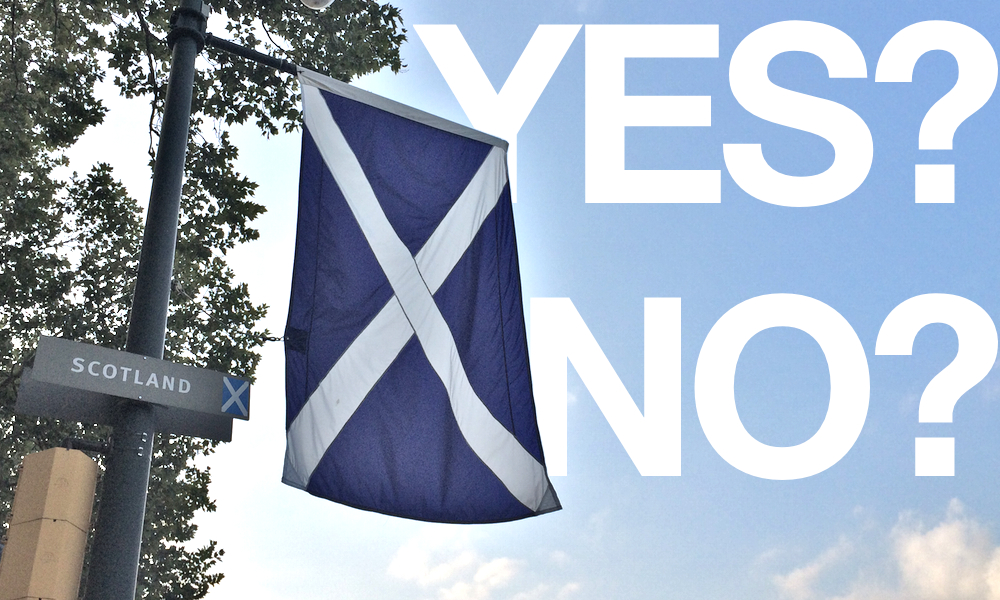 Should Scotland be an independent country? Yes? No?

The 8 most important words any Scot will be considering over the next month before the most crucial moment in over 300 years of proud history. However, is the question broad enough to capture the true mood of the nation at this monumental Caledonian cross roads? More importantly, are the answers?

Rarely can the prospect of a nation’s emancipation after centuries be digested into black and white. What of the areas of grey (grey symbolising both the skies for which our land is famous, and the ambiguity surrounding the future whatever the outcome on the 18th September)? For it seems that, if we were to sieve out the “Mc-stremeists” on either side whose opinions are proclaimed as fact, a large majority of proud Scots would presumably be engulfed by the grey. This author is one of them.

Upon being put the killer question of Scottish Independence, quick-fire style, the instinctual response is to think “no”. Scotland, a small country of 5 million-odd proud people, would suffer from the lack of economies of scale that being part of something larger would offer—our voice internationally would be drowned out by the big boys and their bureaucracy. Our relative insignificance would leave us vulnerable in terms of Defence, Immigration, and Economy. We would be marginalised to being a backing dancer in the theatre of world politics. We only have to look at River City, and countless other STV projects, or the infamous Tram system in Edinburgh to see what happens when Scotland is given free rein to manage its own affairs.

However, upon careful consideration, are these assertions accurate? Scotland, in the not so distant past, has contributed significantly (and in some ways crucially) to the shaping of the modern world. We proudly proclaim to have invented world-renowned products such as the TV, penicillin, tarmac, and John Barrowman. Our language and poetry is known the world over, the musical climax to every year in the Western calendar, whilst the founding father of modern economics, Adam Smith, drew his inspiration from Kelvinside. Our cuisine sparks the interest of the world, and drops of 40% alcoholic heaven spread from the Glens into bars across the globe. In the Arts, we can boast a living James Bond, a Dr Who, and a stereotype-shattering singer known simply as SuBo. Even in athletics, our tiny country has produced some the greatest football managers of all time, a champion tennis player, an all-conquering women’s curling team, and even previous rulers of the Elephant Polo world title.

All from a tiny, mountainous country with a population half the size of London.

I think it’s therefore safe to say that Scotland could be an independent country. However, in many ways it already is. Nearly two-thirds of Scots worldwide see themselves as Scottish before British, whilst still holding a British passport. Our culture benefits from a uniqueness and charm largely absent from those of our fellow island cousins. Our accents, fondness for a swally and colourful currency already mark us out from non-Scots. What it is to be Scottish is in no way diluted by our commitment to the Treaty of the Union. We benefit in the UK from being greater than the sum of our parts.

The major downside, however, is the political misrepresentation of Scotland in Westminster, with a Tory-led coalition seemingly as welcome in Scotland at the polls as a fart in a spacesuit, to use a classic phrase from one of our legendary comics. It could also be argued the other way, with Scottish MPs currently using voting rights on English matters.

With all the bluster and conjecture inherent in the debate, it is easy for one to become confused—or worse still, disinterested in one of the most important moments in the country’s history. The situation is exacerbated, there appears to be alarmingly few material facts about Scotland’s future for either side to draw upon. Therefore, let’s simplify everything for a moment.

The High Seas and Scottish independence

Given our island position, and fine naval history, let’s use a shipping analogy. The UK is made up of 4 ships, sailing the ocean. Since 1707, they have been tethered together, each with their own Captain and crew. The Captain of the biggest ship has the majority of the say on the direction and affairs of the fleet as a whole, whilst the other Captains have primary responsibility for their own ships.

The Captain of the Scottish vessel runs a tight ship. His people are happy, healthy and proud and enjoy lots of benefits that the other ships’ crews are not provided. Some say the benefits are paid for by bullion from the larger ship, whilst the Captain staunchly defends his position, maintaining that he gives more pillaged loot to the main ship than is received. Whilst experiencing times of boom and bust together as a fleet, the Scots Captain and his crew often look out into the open water and dream of the wonders that lie in store if they were to break free of the tether.

A dense fog approaches. The Captain has his chance to ask his crew whether he should cut the guide ropes and sail off on his own path. The Captain is adamant in his assertion that his ship is in rude health, and will sail even faster and longer than before on its own.

The Captain of the main ship senses the threat of separation, warning the Scots crew that there will be unforeseen holes in the ship’s hull, the sails are old and withered and the rudder unreliable. He also speaks of the virtues of staying in the fleet, adding that he will give more free rope to the Scots ship if they decide to remain tethered. At that, he leaves the decision to the ship’s resident crew.

The crews of the others ships murmur their opinions, ranging from apathy to irritation at a lack of say in the future of the fleet. The ex-crew members, deposited on various islands around the world to spread the word of the mighty Scots ship and search for bullion to bring back, are similarly unimpressed upon hearing the news that they will not have their voice heard in the future of their ship.

The Scots Captain, overcome with bullish optimism, reiterates his claim that the ship is in fine fettle, denouncing the cynics as traitors and scaremongers. He implores his crew to ignore all others but him as he paints the picture of a fantastical future of wealth, influence and freedom for his crew. The crew is torn between the security of the fleet, and the dream of independence in the open ocean. They enter the fog, with no sign of light, not knowing what the situation will be when the clouds fade… 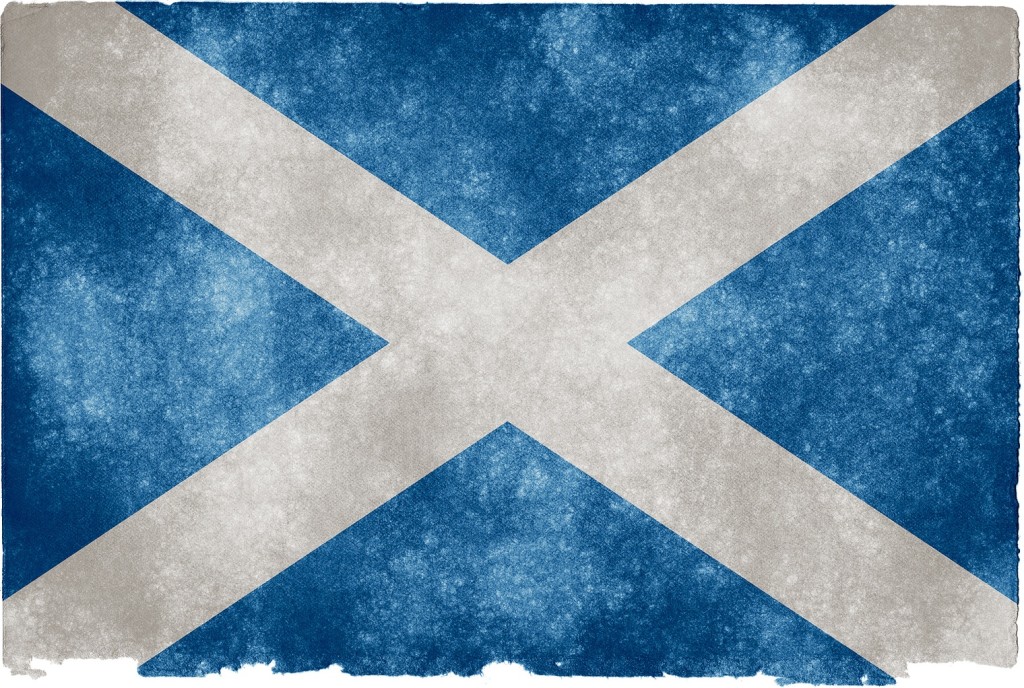 A “yes” vote is an optimistic vote, placing faith in Alex Salmond and his cronies to steer Scotland through the fog of transition and into clear open waters as an independent vessel. Seduced by promises of greater wealth and control of home affairs, the appeal is undeniable. But where are the facts? How do we know our ship will be in good health when all we have to go on is the word of our Captain—his self-interest in his own legacy an important influence on his opinion. A “yes” vote could also lead to us running aground, lost in the vastness of the sea or, worse still, taking on water through the cracks in the hull until we are overcome and have to call for rescue from the fleet.

There is also the small matter of what will happen to the rest of the fleet without the Scots ship. Will they have to change the flags that have flown on the mast for centuries? What of the collective fleet bullion and artefacts—will this be divided? Will crewmembers still be allowed to jump between ships without permission? The importance of the vote on the rest of the United Kingdom should not be forgotten.

The often forgotten aspect of the debate is of the implications of a “no” vote. A “no” vote is not an anti-Scottish gesture by any means, even if the SNP are keen to tar the naysayers with that particular brush. A “no” vote is also not a vote to maintain the status quo—the fact that the referendum is even on the agenda shows that it’s no longer acceptable to the Scots, even to the “no” voters. One thing we can be sure of is increased devolution, a slacking of the guide rope, to continue the analogy. An opportunity would then arise for the Scots ship to explore further on its own, set more of its own rules, and even gain more recognition from the other ships in the sea for its accomplishments. All whilst maintaining links with the UK fleet to allow all 4 ships to prosper together.

The problem is the uncertainty that surrounds everything in this debate, providing an almost insurmountable obstacle for anyone wanting to make a rational, informed decision. The problem shared by many is that the heart says Scotland could be a thriving country in its own right. The head argues that, with no real plan offered by the SNP other than “come on, we’ll be fine,” this is a massive risk. And are we really that disadvantaged by our relationship with the UK? The feeling certainly isn’t of oppression of any sort. The overriding presumption is that the SNP have not fully thought through their plan, seemingly starting the ball rolling on the independence campaign long before thinking through the implications. Therefore, one could conclude that independence is indeed a shining beacon to aim for, but we are not yet ready to take to the challenge on the foundations we have, and with the leadership we have.

Should Scotland be an independent country?

With “yes” and “no” not seemingly adequate answers for my opinion, I would offer the referendum the following answer:

“Scotland should be an independent country, but the decision needs to be based on a comprehensive plan to satisfy the Scottish peoples’ concerns, and not a wave of thoughtless optimism and national fervour.”

The most ironic aspect of all of this—due to my place as a Scot on the crew of the biggest ship in the fleet—the Captain hasn’t even given me an oar in the fight.

William Grant is a consultant for one of the Big Four consulting firms in London and regular contributor to Novel Stance.